Home » Gnocchi: from Italy to the world

Italian food is more than wheat pasta dishes. There are many recipes that are part of the traditional cuisine of this country. Gnocchi is popular both in Italy and in the Southeast region of France, and is part of the wide variety of meals that can be found on the menu of Italian foods.

Today you will know more about gnocchi, their nutritional value, how to make them and we will bring you a delicious recipe for gnocchi that will make your mouth water.

If you still don’t know how to cook gnocchi, this post is made for you. Keep reading and enjoy!

Gnocchi and all you need to know about them

Gnocchi is a type of pasta made with potatoes, flour and ricotta cheese. Yet some recipes add different ingredients, like semolina and corn flour or spinach, the most common recipes use those mentioned above.

Gnocchi are typical of Italian and Nice cuisine, but there are dishes that have similar preparation in different countries of Europe and even in South America.

Are gnocchi good for health?

This pasta is rich in complex carbohydrates, and can perfectly be included in a healthy diet. By incorporating the protein part, healthy fats and vegetables, it becomes a complete dish by itself.

Thanks to its ingredients, gnocchi also provides the body with some B group vitamins; vitamin C, and a high content of potassium. By the way, it is advisable to cook potatoes with skin to preserve all their nutrients.

On the other hand, this food is low in fat and sodium, as well as being satiating and easy to digest.

Gnocchi versions in Italy and the world

As mentioned above, each region of Italy has its own version of gnocchi. There is a variety called canederli. In this case, they are not made with potatoes, but with bread, milk, flour and dehydrated meat. They are tiny in size, similar to those cooked in the Middle Ages in Italy and are usually served with broth, cabbage and chives.

Also in the north, in Piacenza, there’s another type called gnocchetti. For its preparation, spinach is used in the dough, hence its characteristic green color. They are usually served with Gorgonzola cheese sauce.

In the area of Mantua and Parma are very typical ones made with pumpkin. They are served with butter, parmigiano reggiano cheese and sage leaves. Delicious!

If we go south, to the Campania region, we find the gnocchi alla sorrentina. In this case, as we like it, the potato is the protagonist. They are served in earthenware casseroles with tomato sauce, provolone and fresh basil. It is believed that this typical recipe originated in a small tavern in Sorrento, hence its name.

In South America, especially in Argentina, Uruguay and Paraguay, the most common gnocchi is potato gnocchi, but cornstarch and polenta gnocchi are also consumed. This tradition of eating gnocchi is due to the massive migration of Italians to that part of the continent during the second half of the 18th century, where even outside their homeland, those families maintained and passed along their traditions and customs to their descendants.

Why do gnocchi have these characteristic grooves?

One aspect that characterizes gnocchi is their stripes.

This, which you could do in a very homemade way with a fork, although it is usually made with a wooden board, gives it a particular identity that we recognize in all types of gnocchi. And it has a meaning that goes beyond aesthetics.

This small groove called riga helps the cooking to be even both on the outside and inside of the gnocchi. In addition, it favors the integration with the sauce at the time of serving.

There is a tradition of eating gnocchi on the 29th of every month.

This comes from the story that Saint Pantaleon, a young doctor recently converted to Christianity, emigrated to Italy fleeing the repression he suffered in his country. There he was welcomed by some humble farmers who gave him a good plate of gnocchi to eat. In gratitude, the young man blessed them by wishing them a wonderful harvest. Whether by chance or by miracle, the saint’s wish was fulfilled and that year the farmers had an unprecedented harvest.

It is believed that this event took place on the 29th, so enjoying a delicious gnocchi dish on that day is a call for good luck.

For the tomato sauce: 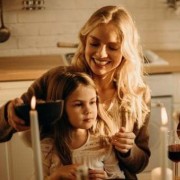